From Apple2Games
Revision as of 20:08, 31 May 2014 by imported>Dmiyares
(diff) ← Older revision | Latest revision (diff) | Newer revision → (diff)
Jump to navigation Jump to search

Here are a couple of fun facts & charts I generated while developing the [ASIMOV Archive Uploads] archive script. The online index is great if you need to quickly search for a file, however, the FTP directories hold a plethora of statistical data... and being someone who deals with data I can't resist building a few queries and charts.

Asimov's oldest file is the dsk image of Dino Eggs which was uploaded on Febrary 23, 1995. The next oldest file, Planet Fall by Infocom, was uploaded on July 30, 1995. From there uploads stopped until the September of the following year... but uploading didn't take off until June 27 of 1998 when uploads sky rocketed to over 2299. This also marks the day that the most items were uploaded to the Asimov archive. The year with the most upload (so far) was 2010. However... the Asimov operators extracted all the GZ files to the native DSK files which might account for the spike. Anyhow.. here's a chart of the data.

No shocker here... but when I ran a word frequecy (ie: made a word cloud) based on only the /pub/apple_II/images/games/ sub directory (we are Apple2games.com after all) most of the words that popped to the top were DISK, FRONT, BACK, SIDE and CRACK. 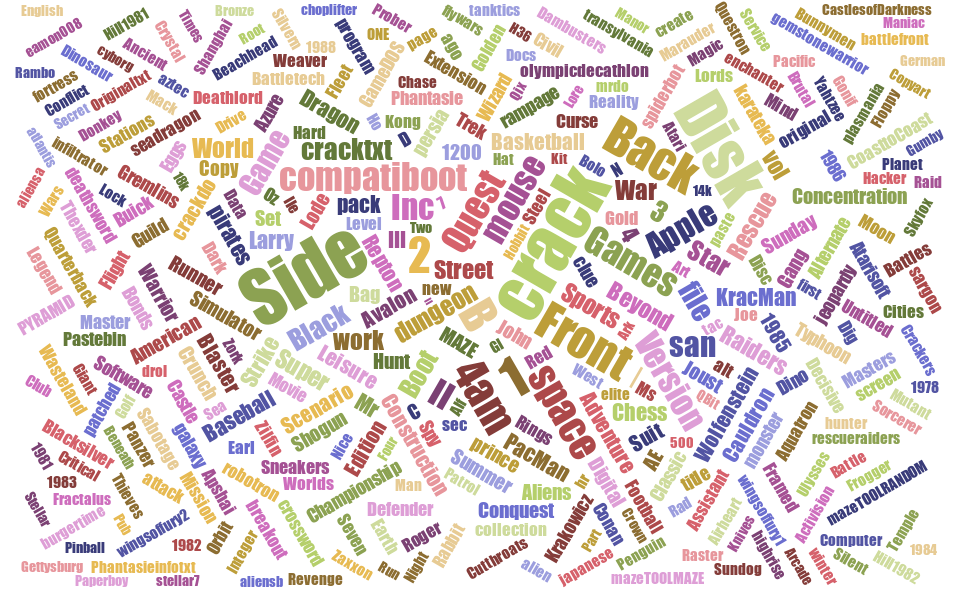 Here's a chart of uploads per month... with this much data and a static (PNG) display things get messy quickly. Typically this is the first query & chart I run on any new project... it gives me an idea of what the distribution of data is and how clean everything is.