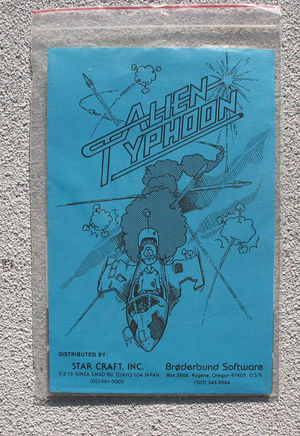 Description: Alien Rain is a 2d space shooter which closely resembles Galaxian from the arcade. The premis of the game is simple. The player is given 3 ships in which to do battle against a barrage of dive bombing aliens. The aliens when shot are worth different points depending on thier color. One special alien of which there are two in the top most row of aliens is worth varing amounts of points depending on where the player shoots them.

Of all the Galaxian clones that were avaialbe for the Apple ][ system Alien Rain was the best and closest to the original.