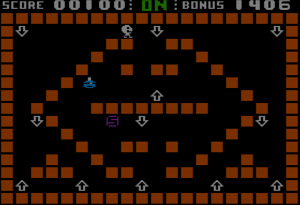 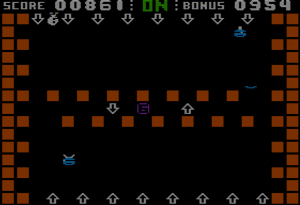 Anti-Gravity can best be described as a "Thinking Man's Pac-Man". The goal of the game is to collect all the "prizes" on the various screens without getting captured by the blue alien or aliens roaming the field. Game play movement is controlled by the left & right arrow keys the space bar. Each screen has 5 to 9 prizes. To get to these prizes the play must use the Anti-Gravity arrows which will push the player in that direction. The play can press the space bar and pass through the anti-gravity.

Anti-Gravity also comes with a level editor which lets users create & edit their own levels.

I'd not seen this game until recently when it showed up on the Asimov archive. I loaded it onto my Droid and spent almost two hours playing this during a conference call. The game is very easy to learn and very addictive.