{{#seo: |title=The Bilestoad was an extremely violent game for it's day. Watch the Video |titlemode=append |keywords=bilestoad,apple,fighting,meatlings,Datamost,axes |description=The Bilestoad is a god view of a two person shooter... only with axes... and lots and lots of blood and gore... yes every on an Apple II from the 1980's }} 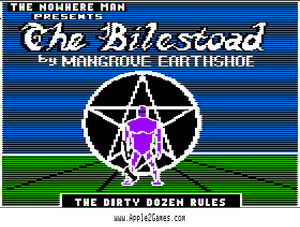 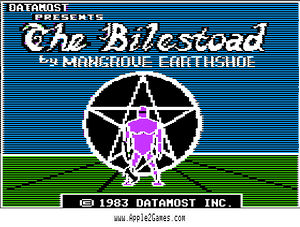 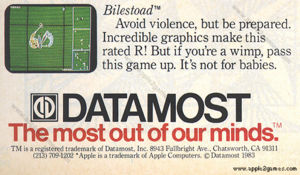 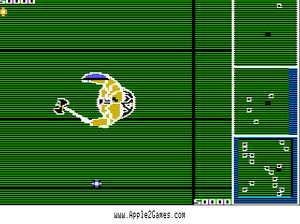 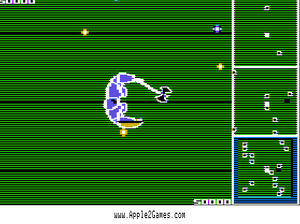 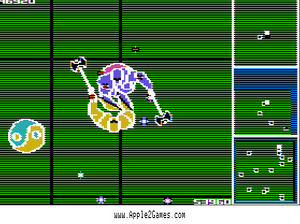 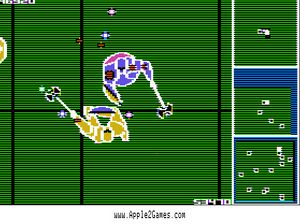 Robots chop away at each other 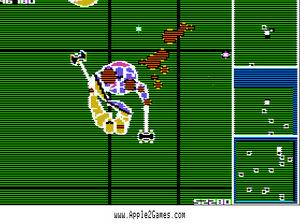 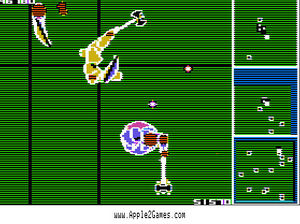 The Bilestoad was an extremely violent game for it's day. Long before Grand Theft Auto and Mortal Combat shocked members of congress into passing the ESRB legislation requiring game makers to label their games with "ratings" Datamost published this gem an promoted it by saying to "Avoid It". Huh? I guess back in 1982 when PacMan was still the reigning king of video games, publishers didn't realize what (geekly) teenage boys everywhere wanted. Violence. Violence. Violence. Bilestoad was ahead of it's time. It was a top down fighting game for one or two players, though two players at the same time was quite cumbersome considering the amount of keys the game used for movement and fighting. In the single player option you battle a robot bent on hacking off your arms and head. Both fighters are armed with an ax and a shield. Movement required 10 keys and was fairly awkward at first, but became second nature after only a few fights.

Fighting takes place on islands which have various discs strewn around on them. Both robots or "meatlings" would warp onto the island at different ends and then would have to run towards each other to being the battle. If the meatlings were to far away from one another to be drawn on the same screen the game would flip back and forth between overhead views of the two players until they were close enough to be drawn on the same screen. During this time apart a Beethoven piece is being played in the background.

Battles would end in one of two ways. A death or an escape. A death is pretty much straight forward. Once a player had both arms cut off or their head cut off they're done. However, a player could withstand loosing a limb and continue fighting if the limb that was lost wasn't the one holding the axe. In the one player mode versus the computer meatling anytime the player would cut off a limb of the computerized meatling it would turn and quickly run to the nearest warp out disc.

After learning the keys that control your meatlings movement game play was quite challenging. The robots were always difficult to kill and seemed to get progressively harder as the levels went on, but the thing that made this game what it is was the blood. Lots and lots of red blood. Almost every axe blow to an opponent yielded blood. The more blood lost the quicker the death. Loose a limb and it would sit there in a pool of blood.

Marc Goodman explains how piracy killed any sort of profitability for The Bilestoad in a 1992 Usenet post here http://clv.me/15dUpps. Marc's previous games sold a lot more and nearly noone heard of them yet Bilestoad was game of the year and only sold 4000 copies. Furthermore Datamost gave SoftDisk the right to republish the Bilestoad without Marc's consent. (note that we couldn't verify if this truely is Marc Goodman posting online back in 1992)