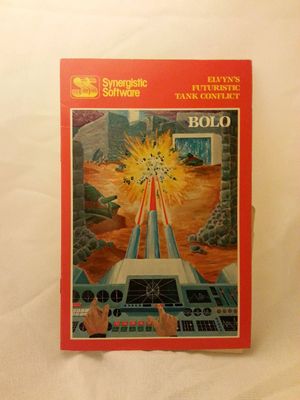 Moving Around the maze looking for the hives

Bolo is a maze tank game loosely based on the Bolo sci-fi book series of Keith Laumer, where tanks with artificial intelligence battle aliens and protect whats left of man kind.

In this game the player controls a tank in a maze and is tasked with hunting down and destroying aliens. The aliens are scattered though out the maze but concentrate around their alien generators or hives. The player must destroy these hives and all the aliens to advance to the next level.

The game is played in a maze with a top down view on the action. At the beging of the game the player is asked to pick which level they'd like to start on which ranges from 1 being the easiest to 9 being the hardest. The player is also asked to pick the density to which the computer will generate the maze. The ranges for this are 1 to 5 where one is a fairly open and easy to navigate maze to 5 which is cramped and tough to move around without crashing into walls.

Aside from aliens firing on the players tank, the player must also watch out for walls which seem to move and appear right in front of you any time your tank picks up speed, they really don't. Fuel is another issue to deal with. Each "sortie" has a limited amount of fuel. Basically a timer in which the player must destroy all the aliens.

Bolo's key controls are one of the most complicated key setups that I remember of any Apple II game, and puts it in the same complication level as Castle Wolfenstein & the Bilestoad.

Here's a super fast play through of Bolo while cheating (yes you can cheat if you know a little bit about Apple monitor code) See http://demin.ws/blog/english/2012/09/10/bolo/ for the cheat "code" on a DOS version which is pretty damn close to the original. Notice how fast the aliens in this video are. With each level of the game the aliens got faster and faster until you see aliens zipping around in the maze as fast as they do in the video below.