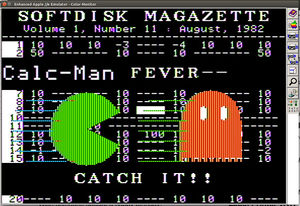 Calc-Man is a hybrid of the amazingly popular Pac-Man arcade game & Visi-calc the very popular business spread sheets program & fore-father of Excel. Calc-Man was programmed by Dan Tobias and included on August 1982 issue the monthly magazine on a disk Softdisk. The game is written in Apple basic and can be edited & modified as I've noted later in this article.

In this game the player is the white cell highlite bar which in Visi-Calc would indicate which cell a user was at. This is the "Calc-Man" of the game. The player navigates through a maze just like the original Pac-Man only this maze in on a spread sheet. Instead of gobbling up Pac-Dots, the Calc-Man eats the number 10 and instead of ghosts, the player is being chased by NEGATIVE numbers. Just like in Pac-Man there are power ups... but the larger blinking power-pills are replaced by the number 50.

Game play is pretty terrible... and I think it might be to the way that Visi-Calc worked at the time. Instead of being able to move in for directions using the Left Right Up and Down keys on the Apple the player had to use only three keys to move. The left & right keys controlled movement to the left & right but also up and down once the TOGGLE key was pressed. On AppleWin emulator (running on Wine Windows Emulator running on Ubuntu) I found that the keyboard did not have the correct toggle key (space bar) mapped. Since the code is all in Apple Basic and fairly short it was easy to find which key (chr$(160)) was called. Not sure why my crummy Linux keyboard wouldn't match this... was I changed it to 192 (A) and game. (Note this is at line 8442 change the 160 to 193)

Over all this game was as fun as it way 35 years ago... that is to say for about 1 lap around the maze. It is however, a great WTF moment from Apple history.

YouTube Video of one maze of play. Note the great "Woz" quote & the Softdisk cover for that month.

From the welcome screen