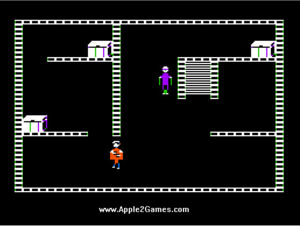 Your Cell. One Guard 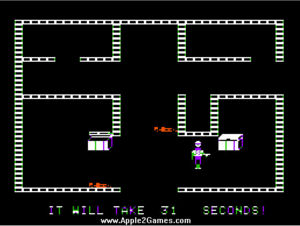 Waiting for the Chest to open 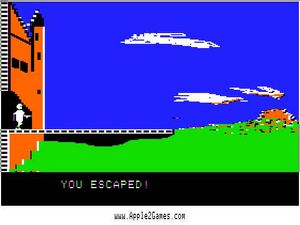 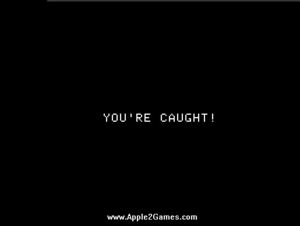 This room maze play game is similar to [Bezerk] of the arcade, only with a lot more anxiety and key stumbling. Or [Adventure for the Atari 2600] only with a tad better graphics and no ANNOYING bats. The castle is made up of about 64 rooms, each room containing a mix of guards, locked chests, doors and stairwells. The guards yelled out in German digitized voices, crude in today's standards, but cutting edge in 1981. Halt... Kaput....Auchtun.. AAaaieeeee... and, my favorite, Schwein Hund... plus a few other hard to figure out words.

There are two kinds of guards in the castle. Normal guards and SS guards. Normal guards are all brown and easy to kill with one or two bullets. SS Guards are also brown, but with the addition of a white SS bulletproof vest. This makes them a ton harder to kill taking four or five bullets or a grenade.

The "quest" in the game is to find the plans and escape. The plans are hidden in one of the upper levels of the castle in a locked chest. There are hundreds of chests throughout the game and most of them are locked. You, as a master spy, can pick the locks on the chests, however, it takes time. You can shoot the chests to reduce the amount of time it takes to pick the lock but that means you also waste a bullet. Times to unlock the chest vary between 10 seconds and 200+ seconds. All the while SS guards can pop into the room and foil your plans.

Inside the chests the player finds different items varying from the totally useful, such as uniforms, bullets & grenades to the totally worthless, like schnapps , sauerkraut & "liebfraumilch", which as a 12 year old I translated to mean "Love Womans Milk" uh.. yeah... only years later did I discover that its a very sweet German wine. [Der Braumeister]

The game is controlled with 18 different keys, nine for movement and nine for using the gun which often times when an SS guard is running towards you makes it very difficult to point the gun in the right direction and fire off a shot without running into a wall. I can remember as a kid, after clearing out a room in the castle, and having to move on to a new room thinking, where would the guard be? Would he be on the other end of the room, or had the computer randomly selected his position to be two pixels away from where I enter the room?

This was a great game and I would consider it to be the great-granddaddy of all today's first person shooters. If it wasn't for Castle Wolfenstein there would not have been a Castle Wolfenstein 3D... no Doom, no Quake, no Grand Theft Auto, no Halo etc. November 2007