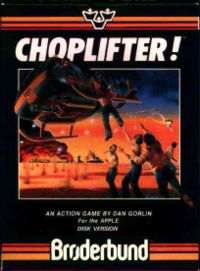 Under attack by tanks & plane

returning safely to base


Programmer: Dan Gorlin
Publisher: Brøderbund Software
Year: 1982
Description: Choplifter is a game that reflects the geopolitical events of it's time. Released in 1982, a year after the end of the Iranian Hostage Crisis and failed resuce attempt, Choplifter's game play centered around the rescuing the hostages. In the game, the player pilots a helicopter from an American base, flying it out over the desert. In the desert there are four houses, each holding 16 hostages. There are also tanks, airplanes and smart bombs all trying to take down the player's helicopter.