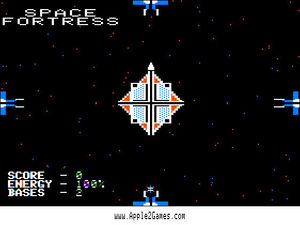 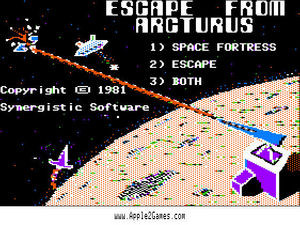 Escape from Arcturus is essentially two games in one. There is the Space Fortress game and there is the Escape game. In the Space Fortress game you play the commander of the last remaining defense satellite which, naturally, is surrounded by aggressive aliens bent on destroying you and your outpost. Yes Outpost is the second game that came to mind when I first saw this part of the game. The obvious game is Star Castle from the Arcade where instead of playing the invader bent on destroying the castle you're defending the castle. Anyway... you're only able to shoot in four directions up down left & right, but that will be the only place that the aliens fire their photons. Overall the game play is weak... my main frustration with the game is the keyboard layout. Y for up G for left J for right and space for down. I guess on the old Apple //s the keyboard layout was a bit different but running this on a modern PC via an emulator the keys are down right annoying. Anyhow...I can't see playing this for any longer than a few minutes.

The second game, Escape, you command escape pods fleeing the alien invaders coming to earth. You have the ability to shoot the aliens before the land on the Earth but the controls are goofy foot. I think this part of the game was designed with paddle play in mind. There is no keyboard controls to this part, and using the mouse is like using a bar of soap to draw. Mouse movement up moves your player down and down moves them up. Overall I can't play this for more than thirty seconds.