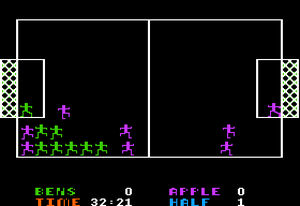 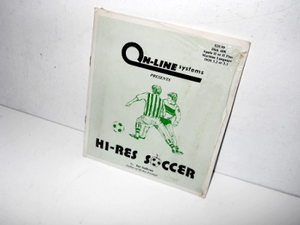 Here's the packaing that the HIRES Soccer came in as found on Retro Treasures.com http://retro-treasures.blogspot.com/2013/10/on-line-systems-hi-res-soccer-apple-ii.html 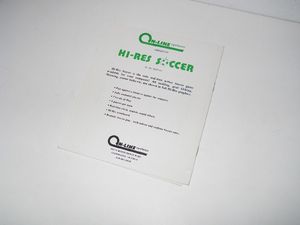 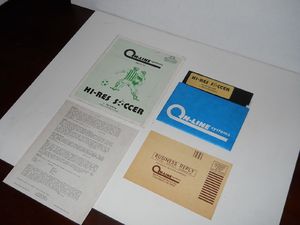 Not really much to say about this game. It was a very very early sports game to "emulate" soccer/futbol. Game play is a little rough as there is almost no player input to the game. If the character with the soccer ball kicks it there's really no way to see which way it's going. One player can play against the computer or if you have two players and are able to share a keyboard two players can play against one another. While playing against the computer there's almost no AI to the game other than the computer team moves towards the ball and if in possession of the ball try to move it to the opposing goal. This leads to what I like to call the "bees chasing a soccer ball" that I see at my (currently) 4 year old daughters soccer games. This is where ALL players on the field including the goalie run and chase after the ball en-mass and get caught up in one of the corners where they can't kick the ball anyway but out of play.

This game has popped up on Ebay a few times and has sold for over $500.