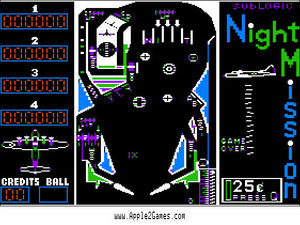 Night Mission Pinball was one of the early pinball games for the Apple 2. Released by Sub Logic, shortly after Bill Budge's Raster Blaster and Broderbund's David's Midnight Magic, Night Mission had superior graphics, sound and pinball options, but not marketing muscle.

Night Mission Pinball table artwork & sound are styled after a World War II B-24 bomber. Ambient plane engine noise is heard though out the time the ball is in play. Bumpers have the sound of dropping bombs, flippers make the sound of machine guns.

Personally I can remember seeing this on the shelf at North Coast Computers next to other titles with flashier packaging, but after playing a demo copy at the store I dropped my allowance (also bought Serpentine) and played this for months!!!