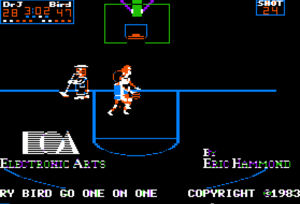 Workman sweeps up the glass from a broken backboard. 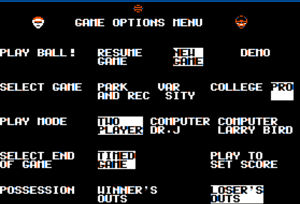 Game options. A far cry from the millions of different options in todays NBA games. Also note the detail in the players faces. 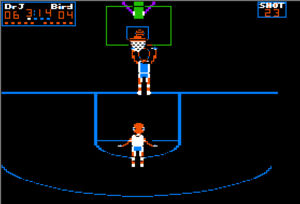 Dr. J jumps for the ball while Bird stands motionless at the free throw line

One On One by Electronic Arts was the first video game to be endorsed by actual sports players. For the time this was a great leap forward for sports games. The concept is simple. Two players, either two human or a human and a computer or computer vs. computer would play one on one basketball on a half court. While the graphics left a lot to the imagination the animation was rather good for a sports game. Jumping looked like jumping and the bouncing ball looked as realistic as you can get with 4 colors, one of them being white.

Both Bird & Erving posed for shots for the game packaging and played a round of one on one for the camera. However, what you see on the packaging is far from what you get on the inside. To typify the poor graphics of the game you only need to look at how the players front faces were drawn. Bird's face is 8 white lines and a line of brown with some black dots while Dr. J's is all brown with some black dots. Birds hair is brown while Dr. J's is black. At times Bird looks more like Jason from the Friday the 13th franchise. I expect him to pull out a HUGE knife and FINISH THE GAME. But I digress.

Graphics aside the game play is fairly easy. There's only a few moves, both defensive & offensive which a player can do by clicking the button on the joystick. Shooting and turning away from the other player are the only two offensive moves that I could find, while pressing the button and "charging" are the only defensive moves. I found it very hard to steal the ball from the other player and only did it once in about an hour of play.

When you do have control of the ball you can shoot three point shots fairly easy if you're Bird but it's much harder when playing Dr. J. Dr. J's strengths seems to be the slam dunk, and breaking the back board, which happened more times than I could count while playing. When you do break the back board there's a 10 second animation of a janitor who comes out with a broom and sweeps away the broken glass, but not before bitching you out with a bunch of peek -16336.

The sound in the game is as good as you can get with the Apple speakers. The game is compatible with the Mocking Board sound system but I was unable to emulate this feature. The bouncing ball sounds pretty good, but the roar of the crowd is way off as it sounds more like a jet engine or some other generated pink noise.

Ok... maybe I'm being a little unfair on One on One since it is 25 years old. It did launch the whole EA Sports domination thing they've got going now with the NBA, NFL, PGA and FIFA. It was a great game when I was a kid and I can remember playing this for hours on end in college.