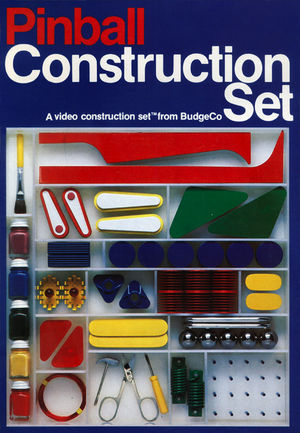 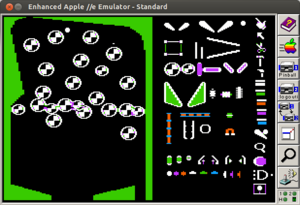 Pinball Construction Set is a game which allows users to build their own pinball games. This was the first in a line of various "construction sets" and "arcade machines". To build a pinball machine the user is given a blank table and a set of fairly simple tools and a set of objects found in a pinball machine. While creating a table is easy, creating a good one could be rather hard, but with a little patience and a fair amount of creativity you could create a cool machine.

The first the first set in building a machine was to layout the non playable areas using the polygon tool. These are the areas that would become the tunnels and paths. This was one of the first times I had seen drafting spines and remember being fairly confused about them. The second time I saw them was in Aldus Freehand (R.I.P.) and found them to be one of the most powerful illustration tools. Anyhow... with a simple square to start off with the user can create some very complex objects using the pointer, hammer, and scissors. Next the launch gate and ball launcher and ball needed to be placed. The default table came with a spot on the right where the launcher, wall and ball fit perfectly. This isn't to say that the game limited users to this area... but having it "lead" the user tended to have the launchers all in the same area. A one way gate also needed to be placed at the top of the shoot to keep the ball from going back in.

Bumpers came in various shapes and sizes. Round bumpers for the top of the table which the ball would hit right out of the shoot, vertical bumpers for the side of the table, and diagonal bumpers to corners. Pinball Construction Set had realistic physics for a computerized pinball game. These could all be changed using the world tool and the slider options, but the default gravity, kick and elasticity worked well enough.

Flippers came in two sizes small & large and both left & right were controlled by the joystick or apple symbols on later Apple computers. Here again changing the wold physics would effect how the flippers worked and how the ball reacted to the flippers. There are also slingshots which worked very similar to the bumpers except these looked like walls. Typically on real pinball machines these are down towards the bottom and have the flippers attached to them. Finally there was the gravity hole or ball eater.

Once finished creating a pinball table, the user was able to save their games. One of the best aspect of Pinball Construction Set was that once the user created a game they could not only save it, but save it as a stand alone executable file. Then the user could make copies for others to play even if they didn't own their own copy of Pinball Construction Set. (This feature could also be seen as a blessing and a curse... for everyone who owned Pinball Construction Set became an instant pinball designer... and like everything else in the world... Tools do not equal talent... and there were an unbelievable amount of badly done pinball games... though Brøderbund's Arcade Machine lead more horrible arcade games than PCS lead to bad pinball games.)