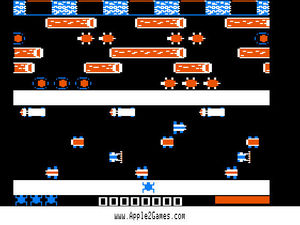 Description: Ribbit is a Frogger clone that's better than the "official" Frogger port released by Sierra Online for the Apple II.

This clone of the arcade version by Sega is closest and best port of it for the Apple II. The detail put into the game on all levels is fantastic. The game play is very smooth. The point of the game is simple. Get your player (the frog) across several lanes of traffic and a river filled with hazards (logs & turtles) to your nest (what do frogs live in?) Simple enough to understand yet hard to master as game play progresses the speeds of the cars, logs and turtles increase as does the volume of cars.

Programmed by an indie development studio (two guys can be a studio right?) in college the game was developed over the course of a month or so. Shortly after selling several thousand copies the publishers were slapped with a cease and desist from Sierra Online who had purchased exclusive licensing from Sega to publish the "official" version of Frogger on the Apple II.

Read the back story at Lance Fortnow's blog... but the tl;dr version is Sega (owners of Frogger) gave Sierra exclusive rights to publish Frogger on the Apple II. The Sierra version was no where as good.

Great back story on how the programmers of Ribbit came up with it and got slapped with a cease and desist from Sierra Online http://blog.computationalcomplexity.org/2005/04/story-of-ribbit.html