Ultima I: The First Age of Darkness

From Apple2Games
(Redirected from Ultima)
Jump to navigation Jump to search

Ultima is the grand daddy of all RPGs and is heavily influenced by Dungeons & Dragons. First published in 1981 by California Pacific this was the first role playing game that I encountered as a kid. Sold in "sandwich bags" at my local Software City Ultima was the follow up to Akalabeth. The "quest" behind Ultima was to destroy an evil wizard who possesses a gem on immortality. Game play is a top down view of the world. There are dungeons, towns, castles, temples, shrines, oceans and lots and lots of orc filled wilderness to be explored. Unlike later Ultima games there is only one character in a campaigning party. At the start of the game the player gets to pick the race (Human, Dwarf, Elf, Hobbit), Class (Fighter, Cleric, Thief, Wizard) and sex (Male, Female, Other) of adventurer they would like to be. The player is also given 50 points to spread among various attributes such as strength, wisdom, dexterity and intelligence. The player gets bonus points in attributes depending on the choices made for race & class.

To achieve the goal of destroying the wizard, the player must preform different tasks/mini quests for various kings and other characters scattered through out the Ultima world. An example of a quest would be to go and kill a gelatinous cube or find the Eastern Sign Post. Upon completing a quest the player is either rewarded with gold or in some cases gems to be used later.

The palyer progresses through the game by gaining experience points. Experience points are gained by doing battle with the various evil creatures who pop out of nowhere or live on various levels in the dungeons. In dungeons the deeper the player goes the more dangerous the creatures are, meaning that each hit a creature lands on the player the more hit points are lost. There are 10 different experience levels that the player has to "unlock" to get to the next quests.

Ultima was originally written in Apple Basic with some assembler code, but was later rewritten & re-release by Origin entirely in assembler significantly speeding up game play. Ultima was followed by eight sequels, Ultima Online and now The Shroud of the Avatar. [[1]] 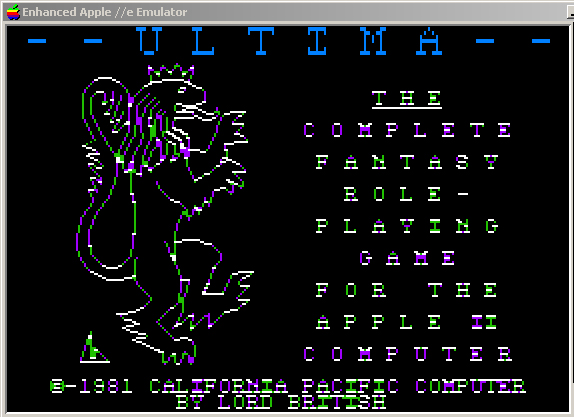 Also check out Nox Archaist at http://www.6502workshop.com/p/nox-archaist.html for a game in the same style as Ultima I